The Falling Fruit Urban Harvesting Project was set up in August 2015. The inspiration for this project came from a video from Abundance Manchester.

The project was greatly helped by an article in the Irish Times by Catherine Cleary and one in the Dublin Gazette. A promotional campaign was launched on Facebook and by October 15, everything was in place for the first Falling Fruit pick! A great team of volunteers gathered in Monkstown and collected a large quantity of apples. From there the team went to Dalkey for another pick. All fruit was delivered to local charities.

Throughout the harvesting season FoodCloud helped to find charities for the fruit. Some Falling Fruit donors picked their own apples and delivered them to charities in their local area.

The fruit picking continued until the end of October 2015. 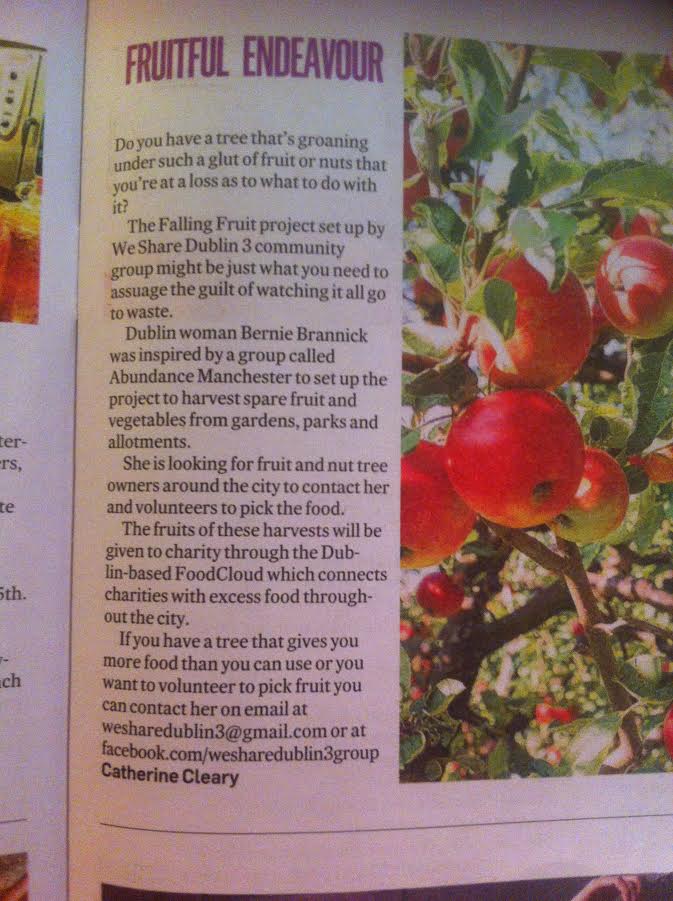 This was the first year of the project – the first of many I believe, judging by the kind helpful response of so many people. Nothing could have happened without the help of Robert Moss of An Taisce Green Communities and Catherine Cleary of the Irish Times who helped to spread the word. For this I am hugely grateful. Much appreciation also to Dublin Gazette, Near FM, Dublin Community Gardens, GIY, Fairview Noticeboard, Marino Church, and Family and Friends. Many thanks also to Foodcloud who linked us to charities who could use the fruit.

Our very first picking event was on October 15. Our generous donor – Ellie and Sarah in Monkstown and Niamh and Jim in Dalkey – kindly invited four of us volunteering pickers into their gardens to harvest the apples – eating apples and cooking apples. It was a great day! Volunteers, Angela, Claire, Ilona and I travelled from different parts of the city to the beautiful gardens. The sun was shining brightly and we worked joyfully for about three hours gathering the fruit, helped along with juice and coffee from our wonderful hosts. Foodcloud found a charity for the harvest and Ellie took on the extra task of delivering the fruit to a charity in Dun Laoghaire (preparing meals for families and individuals in food poverty).

Another wonderful day was spent at the home of Emer in Terenure who donated a tasty crop of cooking apples. Volunteers Helen, Ruth, Helen, Elaine and I picked and sorted the fruit which was then delivered to two charities in the local area by Ruth and Elaine.

Many other donors contacted Falling Fruit and crates of apples were delivered to charities. Some of these were:
• Charles in Rathfarnham offered surplus fruit from his garden. He delivered it to a charity in Clondalkin.
• Brigitte had surplus organic fruit in Co. Meath which she picked, packed and delivered to two charities in Drogheda.
• Ailbhe collected her surplus harvest and delivered it to a charity in Clondalkin.
• Judith in Dun Laoghaire had a rich harvest of organic apples which she gathered and brought to a food bank charity in Dun Laoghaire on more than one occasion.
• Suzanne delivered her apples to a charity in Clondalkin
• Jacqueline in Donnybrook Heritage Garden offered surplus organic apples and found a charity for them.
• Jan in Rathmines donated and delivered her surplus apples to a charity in Rathmines
• Barbara in Rathgar offered her apple harvest for next year as this year they were already used.
• Kathleen in Terenure contacted Falling Fruit and then distributed her apples among friends.
• Els in Cork contacted Falling Fruit to enquire if it was operating in Cork.
Falling Fruit participated in the Dublin Made Me Market in Smock Alley at the kind invitation of Catherine Cleary – a great supporter of Dublin food growers. Falling Fruit collected a large quantity of apples for this event – all due to the great help of Andrew Jordan who found the fruit, helped with the fruit picking, sorting, storing and transported it to Smock Alley early in the morning. The fruit came from a disused apple garden in North Co. Dublin and a magical time was had collecting the fruit with Andrew and Judit. Catherine organised an apple press to make fresh apple juice at the market and to show how surplus apples can be put to good use. The apple press and the fresh juice attracted great attention. A team from WeShareDublin came to help out at this event – many thanks to Judit, Anne, Eoghan, Miren and Tommy. We also had two other wonderful helpers – Ann and Jeremiah. The spent pulp was collected by Andrew to be used for composting or making cider vinegar.

Niamh at Foodcloud did great work finding charities for the harvested fruit, within the area where the fruit was growing, as was the preference of Falling Fruit. One of the principles of Falling Fruit is to reduce food miles and carbon footprint. Foodcloud also distributed some surplus fruit from Falling Fruit at the international Web Summit in their efforts to spread awareness of locally grown food and food waste prevention.

In gratitude and appreciation
Bernie 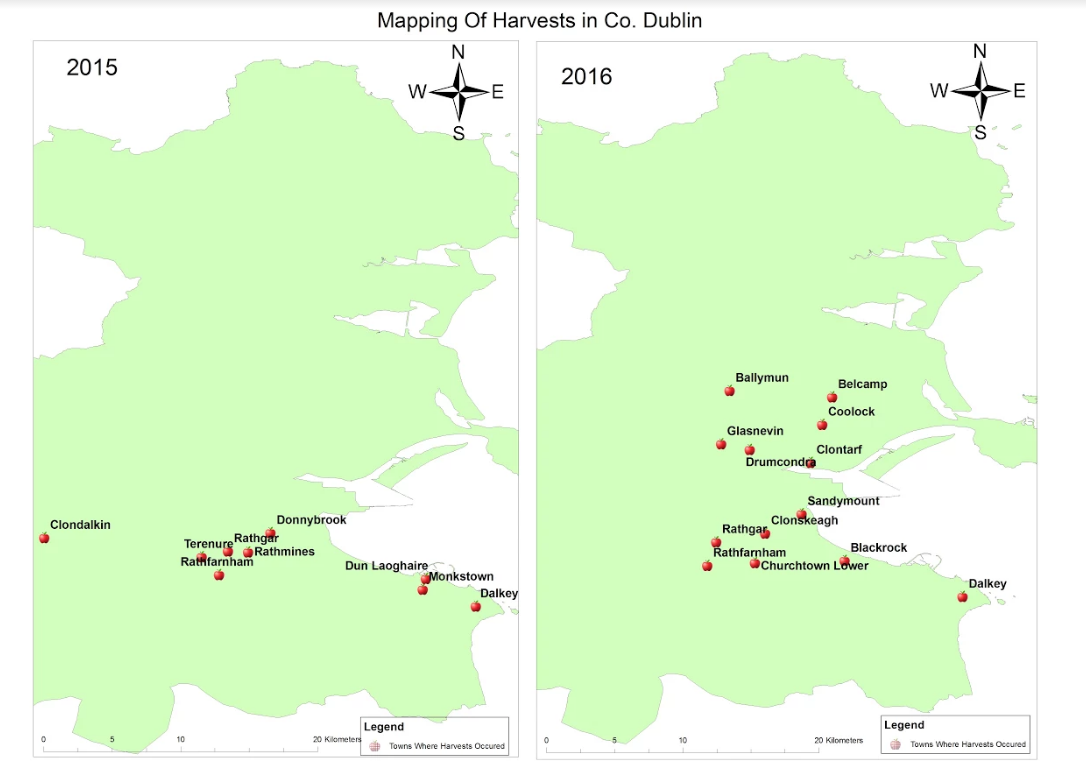 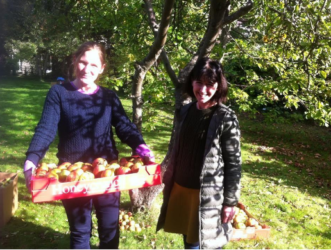 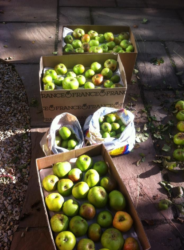 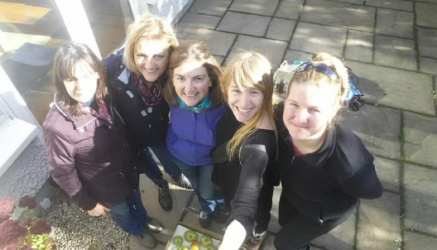 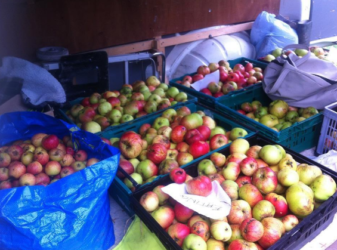 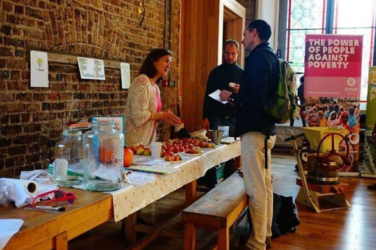 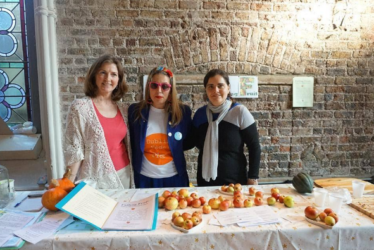 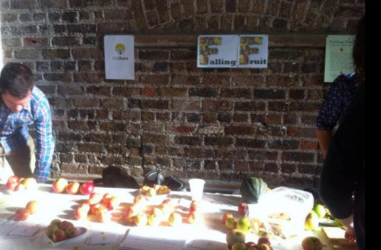 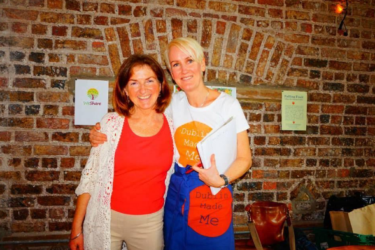 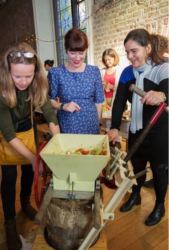 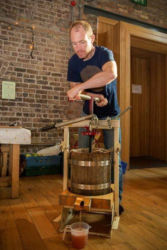